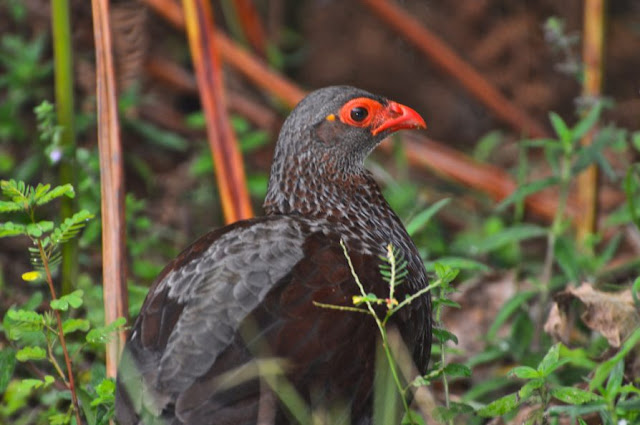 Rwenzori Mountains National Park is one of the prime bird watching destinations in Uganda with over 177 bird species which include 19 Albertine Rift endemics. Bird watching is mostly done while on hikes in the forest zones since this is the highest point and popular Uganda birding tour destination. Birds to look out for here include the Rwenzori Turaco, Long-eared owl, Archers’ robin-chat, Lagden’s bush shrike, Blue-headed and Golden-winged sunbird, White-starred robin, Slender-billed starling, Cinnamon-chested bee-eater, Bearded vultures, and swifts.

Second on the list of the 10 best birding safari Uganda destinations is Bwindi Impenetrable Forest National Park. Bwindi Impenetrable has been voted as Africa’s best birding spot by the African Bird Club. Out of the 24 Albertine rift bird species, 23 of them are found in Bwindi Forest National Park Uganda. The forest is home to many rare bird species, some only found here for instance the African Green Broadbill. 350 bird species stay here and these include the 23 Albertine Rift endemics, 14 of which are not recorded anywhere else in Uganda. On a Uganda bird watching tour, look out for the Chapin’s Flycatcher, Shelley’s Crimsonwing, Handsome Francolin, Mountain-masked and Collared Apalis, White-bellied Robin Chat, Black Billed Turaco, Fraser’s Eagle, Western Bronze-naped Pigeon, Purple-breasted, Blue-Headed and Regal Sunbirds among others. This is also the best destination for a Uganda gorilla trekking safari and both activities can be tailored in a single trip.

Other amazing birding spots include;

Birding in Queen Elizabeth National Park is an incredible treat to do on your Africa safari holiday in Uganda. A Uganda birding safari gives you chance to explore bird species in Uganda’s most popular and most scenic National Park that contains a variety of habitats that range from savanna to wetlands to lowland forests. The park’s diversity is reflected in the list of over 600 bird species, making it the biggest of any protected area in Uganda. A majority of the bird species found in this area are regarded as famous birds of East Africa and are a must see for birdwatchers in Africa! Take a Uganda safari to Queen Elizabeth National Park Uganda for an amazing Africa birding safari. Birds to spot there include; Palm-nut Vulture,Hooded Vulture,African White-backed Vulture,Ruppell’s Griffon Vulture,Lappet-faced Vulture,Brown Snake Eagle,Raptors,African Mourning Dove,Diederik Cuckoo,Squire-tailed Nightjar,Slender-tailed,Nightjar ,Swamp Nightjar and many more.

Jinja source of the Nile

When you get there, birding will even become more special when you know you’re going to see so much spectacular birdlife where the mighty River Nile starts it journey. It has given so much life to so many people across many countries and has helped shape the civilized world as we know it. And guess what? It also gives a huge source of life to all the bird species that call this wonderful place home! What makes Jinja a wonderful birding destination is that the river’s water brings out a wide array of terrestrial and wetland species. You will undertake a boat cruise along the River Nile so you can get up and close to the stunning bird life the area has!

If you are looking for a rewarding bird watching safari in Africa then Uganda is the best choice.